Mary Favret is Professor of English at Johns Hopkins University. She is a specialist in British Romanticism and late 18th- and early 19th-century literature in English. Her first book, Romantic Correspondence (1993), investigates the ways in which letters in the Romantic period become the vehicle for a political, disruptive force. War at a Distance (2009) investigates the origin of our modern experience of wartime: what it’s like for citizens to go about their daily routines while their country sends soldiers around the globe.

Robert Mitchell is Marcello Lotti Professor of English at Duke University. His research focuses on relationships between literature and the sciences in the Romantic era, as well as contemporary intersections among information technologies, genetics, and commerce, especially as these have been played out in the legal, literary, and artistic spheres. His most recent work has focused on the theory and practices of experimentation in both the arts and sciences, the history of vitalism, and the relationship between aesthetics and biological concepts of population. He has published three single-author monographs: Sympathy and the State in the Romantic Era: Systems, State Finance, and the Shadows of Futurity (Routledge, 2007), Bioart and the Vitality of Media (University of Washington Press, 2010), and Experimental Life: Vitalism in Romantic Science and Literature (Johns Hopkins UP, 2013). He is also co-author of the monograph Tissue Economies: Blood, Organs and Cell Lines in Late Capitalism (Duke UP, 2006) and the DVD-ROM Biofutures: Owning Body Parts and Information (U of Pennsylvania P, 2008). Mitchell is co-editor of several collections of essays, including Data Made Flesh: Embodying Information(Routledge, 2003), Romanticism and Modernity (Routledge, 2011), and Releasing the Image: From Literature to New Media (Stanford UP, 2011), and co-editor of the book series “In Vivo: The Cultural Mediations of Biomedical Science” (University of Washington Press). He has also published many articles in humanities, social science, and natural science journals, including Science, The American Journal of Bioethics, Biosocieties, Studies in Romanticism,and PMLA. His current research focuses on relationships among biopolitics, the logic of populations, and the arts. 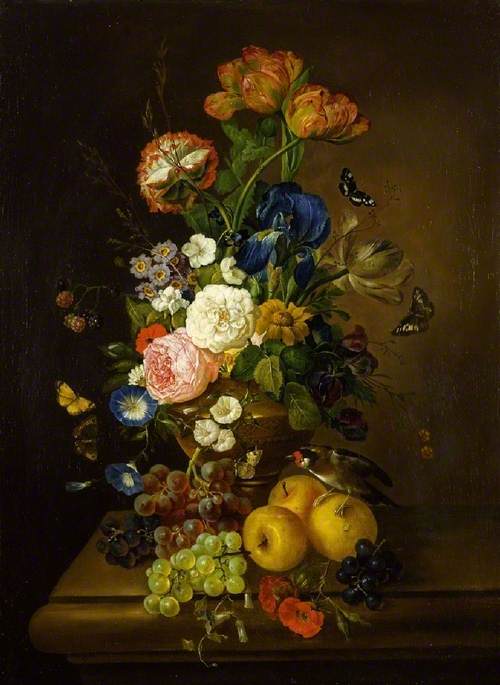 photo credit, The Fitzwilliam Museum. Mary Moser, “Vase of Flowers.” Moser was a founding member of the Royal Academy in 1768.